Mount Etna is famed for being Europe’s tallest  at 10,922 feet high at its summit; it is situated on the East coast of Sicily. Over the past 3,500 years Mount Etna has erupted constantly. Although, volcano eruptions can be said to be catastrophic, with the disruption caused by the thick blanket of smoke in the air, which can adversely affect air travel, the most recent eruption from Mount Etna that occurred October 2013, caused activities at Catania airport to come to a halt, the airport was temporarily closed down as a result of volcanic activity. In fact, the most famous active volcano in Italy is Mount Etna, so most people think there is only one active volcano in Italy. Less famous but still active is volcano Stromboli, and for this reason we can talk about active volcanoes in Italy.

Italy is renowned for its recurrent volcano eruptions, although volcano eruptions are usually not well received all over the world as they instigate feelings of fear and destruction in people. The recent eruption of Mount Etna in October 2013, did not cause any significant damage to the locals as lava diverters were put in place. 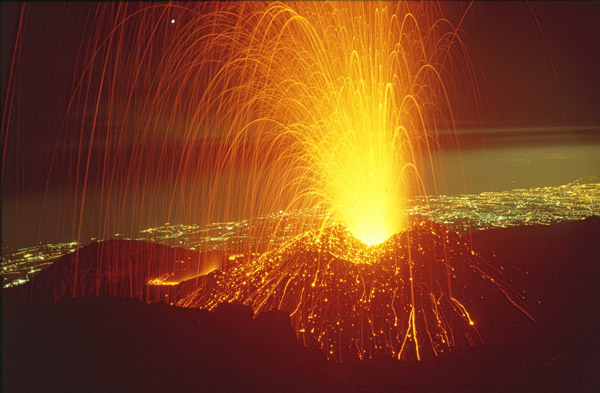 Planet Veneus visible as white dot above in the sky, and Catania on the other side of the volcano.Beautiful photo courtesy of Boris Behncke, INGV-Osservatorio Etneo. Prior to the October 2013 eruption, the last notable eruption from Mount Etna was  in 1992. In total, there are about 3 active volcanoes in Italy that spew lava intermittently: The Vesuvius volcano close to Naples, Stromboli and Mount Etna in Sicily. There are other volcanoes in Italy which have been labelled as dormant or inactive these include: Vulcano volcanoe perched on the Aeolian Islands, the Campi Flegrei volcano, Ischia volcano, Lardello, Isola Ferdinandea, Lipari and Vulsini. Italy’s consistent volcanic activity is principally due to the fact that the country is only a short distance to the boundary between the Eurasian plate and African plate.

The city of Pompeii in Italy,  a once bustling and thriving city was suddenly stuck by Mount Vesuvius in AD 79. The city was consumed by volcanic ash and pumice annihilating all living organism. Toxic gases and destructive volcanic ash destroyed the city. Those who escaped before the eruption were saved, however those who relented and stayed back in the city were asphyxiated, they lost their lives where they stood. For decades the city was buried under 60 feet of hardened ash, a sight of total devastation.

The remains of Pompeii are still in Italy, visitors can now view the streets, the environment and see exactly the wreckage caused by the volcano. Plaster casts of both inanimate and animate objects can be seen, visitors can see both people and dogs in their exact positions when they died. The original bodies of the deceased are no longer there, however the hardened ash has created perfect molds of the bodies.

It is not all doom and gloom, impressive efforts at volcano control can mitigate volcanic damage. For instance Earthen dams can be erected to accommodate the lava for a period of time, similarly diversionary channels can be created and dug to make way for the lava to flow. Technology has developed in leaps and bounds since the destruction of Pompeii, volcano eruptions can now be curtailed with advanced technology.

Likewise, regardless of the destructive abilities of volcanoes, locals still refer to Mount Etna as “Mongibello,” the beautiful mountain. Many locals have taken advantage of the rich soil enriched by the fallen ash to grow items like grape and olives.

Click the following link to check the prices of removals to Italy.

If you are moving or relocating to Italy, it is important…